There are different methods for getting nested or repeating XML structures to the database. For example, loops on elements of an XML structure can be implemented in BPEL, calling the DbAdapter for every element. See for example http://javaoraclesoa.blogspot.nl/2012/03/loops-in-bpel-11-and-20.html. The method mentioned requires some work and one can question it's efficiency in terms of performance. For every item to be processed, the DbAdapter is called and a transformation is required. An alternative is using PL/SQL object types. PL/SQL object types can contain repeating and nested structures and can be send to the database in a single DbAdapter call. This reduces the overhead caused by calling the DbAdapter (faster) and the complexity of BPEL code (easier). Because no complex (technical) logic is required in the code calling the DbAdapter, this method also allows for easier implementation in for example Oracle BPM. In this post I'll describe how this method can be implemented using a BPEL code example. There are some considerations though when using PL/SQL object types.

The below code shows how a repeating structure can be implemented using a PL/SQL object type;

To illustrate the usage of the ITEM_ARR type, a sequence, table, trigger are created and a small TAPI (table API) package. The trigger is optional for this example.

CREATE OR REPLACE TRIGGER ITEMS_TAB_BI
BEFORE INSERT ON ITEMS_TAB
FOR EACH ROW
BEGIN
IF (:NEW.ID IS NULL) THEN
SELECT ITEMS_TAB_SEQ.NEXTVAL INTO :NEW.ID FROM DUAL;
END IF;
END;

To use an object type from another schema, the connecting schema needs to have execute permission on the object type.

In BPEL the ADD_ITEMS procedure can be called. This procedure will bulk insert all received items in one action. From BPEL, the DbAdapter only has to be called once. This is a good thing considering calling the DbAdapter is relatively expensive. In BPEL only one simple transformation is required and no ForEach or While activities have to be used.


The below image shows a short overview of the process and simple exception 'handling'. 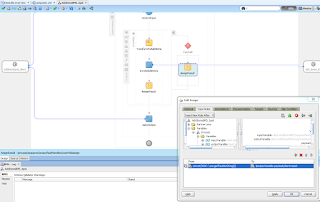 I've used the message type of the itemCollection (see also  http://javaoraclesoa.blogspot.nl/2012/03/loops-in-bpel-11-and-20.html). An itemCollection is as the name might suggest, an array of items. An item contains a name and a value. The below image shows the used transformation from the input message to the message used to call the DbAdapter. As can be seen, the repeating elements are present in the target message.

When calling the service from the webservice test page in the Enterprise Manager, it looks as followed; 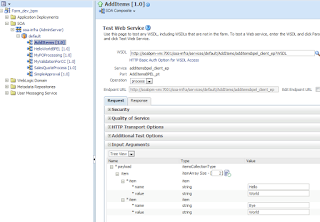 The result from this call is shown below;

The code can be downloaded here; https://dl.dropbox.com/u/6693935/blog/ItemUtils.zip

The datamodel is defined in XML schema's in the BPEL process and also in the database definition of the object type. When adding a field or changing the order of fields, the database code and the BPEL code need changing. You won't get errors in every situation when you don't do it right, since object type fields are passed in order and not by name. This is a thing to mind when making changes.

Object types in tables and queues

Object types can be used as a type in a database table or a queue message type. My suggestion is not to use object types this way. The below error message says much.

If the object type changes, you will have to consider migration strategies of existing tables and queues. This can be troublesome. Sometimes tables need to be dropped and recreated because an alter type might not be sufficient to achieve the desired change. In a production environment, if the PL/SQL code has not been written in a modular way, making sure the queue is empty and will remain empty during the installation, can be a bother.

Also when a complex datamodel is implemented using PL/SQL object types, the dependencies between the types can become difficult to manage in case of changes. This is illustrated in my example by the following;  I can't CREATE OR REPLACE the ITEM type because it is used in the ITEM_ARR type.

Object types can be used to increase performance and decrease complexity, however changes are more difficult to implement. My suggestion on this is to only use them in the following cases;

- when using them allows you to avoid complex BPEL code
- when performance is important and you want to minimize DbAdapter calls and transformations
- when changes to the data structure implemented in PL/SQL object types, are rare

Don't use them as a column in a table or queue. You are more flexible by using other methods such as using primitive types and spreading the data structure over several tables or by using XMLType or LOB data types.
Posted by Maarten Smeets at 5:21 PM