The REST Adapter is an important new feature of Oracle SOA Suite 12c. This new adapter allows easy calling/exposing of RESTful services (see http://javaoraclesoa.blogspot.nl/2014/05/what-is-rest.html for an introduction to REST) based on a WADL or configured manually. Not only does Oracle introduce the REST Adapter, but JSON support is also added in SOA Suite 12c. These features will greatly increase the integration options and flexibility of Oracle SOA Suite. In this blog I'll describe how a RESTful service can be called by using the REST adapter. Exposing a RESTful service will be described in a later blog. 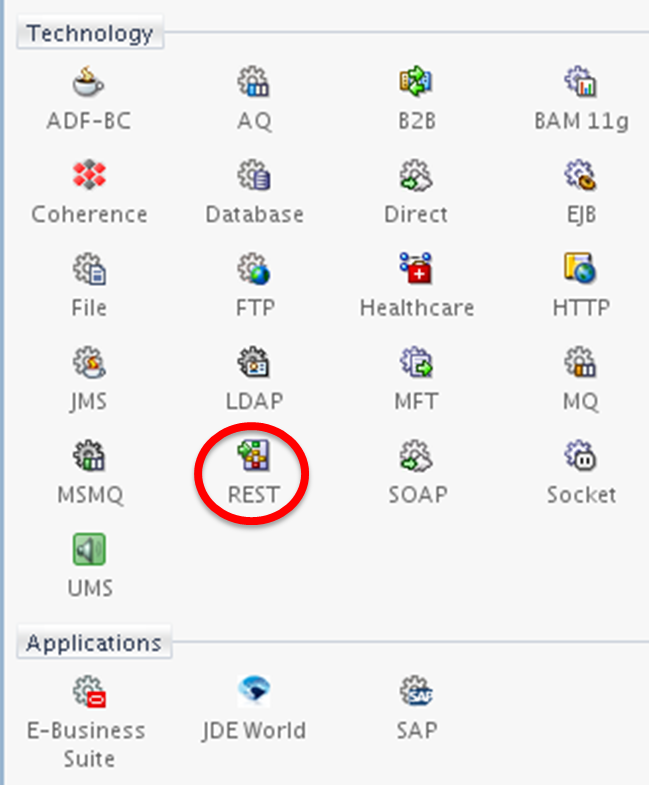 
The REST Adapter can be configured in 2 ways. Manually or by means of a WADL (Web Application Definition Language). The manual definition will not be described in detail since the result should be the same as is done by means of a WADL. This also nicely illustrates that using a WADL is preferable.

A WADL for REST services can be compared to a WSDL for SOAP services. As with SOAP services, using a predefined definition file makes the configuration easier. This is especially true when calling REST services. Some frameworks provide out of the box WADL's such as JAX-RS (see for a simple implementation example; http://javaoraclesoa.blogspot.nl/2014/05/what-is-rest.html). If a WADL is available, use it. It is more likely more complete then what you can create yourself. When there is no WADL available, a third party tool can be used to generate a WADL. Smartbear SOAP UI for example. In SOAP UI you can configure a RESTful service and SOAP UI will generate the corresponding WADL for you for free. 'naam' in the below screenshots is dutch for 'name'. 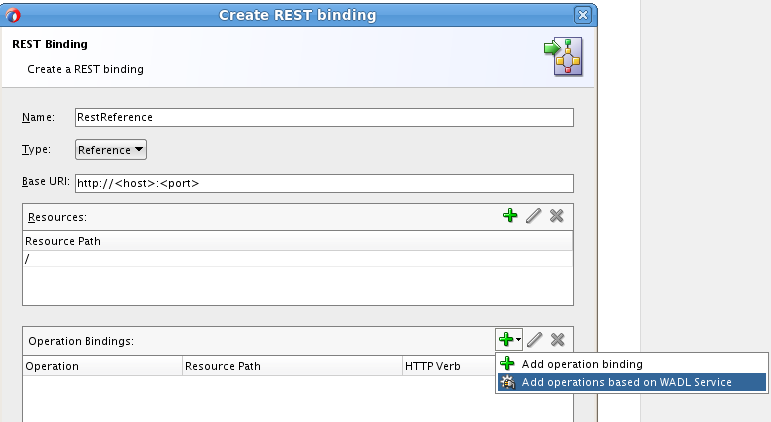 The WADL chooser supports URL's to download a WADL from. Also deployed SOA composites or OSB proxies can be selected which provide a RESTful interface. A deployed JAX-RS service however cannot be selected.

For the operation bindings, Template and Query style REST parameters are supported (see http://www.soapui.org/REST-Testing/understanding-rest-parameters.html for an overview of REST parameter types). When you edit an operation binding, you can specify the response message. The request is defined by the resource definition. The response can be JSON or XML. You can also specify the expected response HTTP code.

When you have configured the REST Adapter, it is easy to do the assignments as usual in BPEL (or Mediator or BPM, whatever you like). Now you can call a REST service returning a JSON message and convert the reply to XML to do the things you usually do with the SOA Suite.

In the above sample I've used a service which obtained it's parameters from a GET request and returned a JSON payload. The JSON payload is converted to XML and can be processed as usual. JSON support is new in SOA Suite 12c. Also several other native formats are supported such as MFL. Message Format Language (MFL) was previously used by the OSB 11g as an alternative to the NXSD used in the rest of the SOA Suite (mainly the file adapter).

My first try at importing a WADL failed because I had neglected to use certain annotations in my JAX-RS RESTful service (see http://javaoraclesoa.blogspot.nl/2014/05/what-is-rest.html for correct sample code). The response could not be determined in this case (and the wizard would not let me set it manually). I manually created an NXSD file and referred to it in the WSDL generated for the REST binding. This implementation method of JSON support with NXSD and the usage of NXSD by the REST adapter leaves the door open to more options for interaction with the SOA Suite. More on this in a later blog post.

This blog post describes calling a RESTful service with the REST adapter. I have also written an article on exposing a composite with a RESTful interface.
Posted by Maarten Smeets at 10:17 PM