In this blog post I'll describe the setup of my environment and my first experience with the Jenkins/Hudson Build and Delivery Pipeline plugins. What it can do to help implement a deployment pipeline and what it won't do for you. 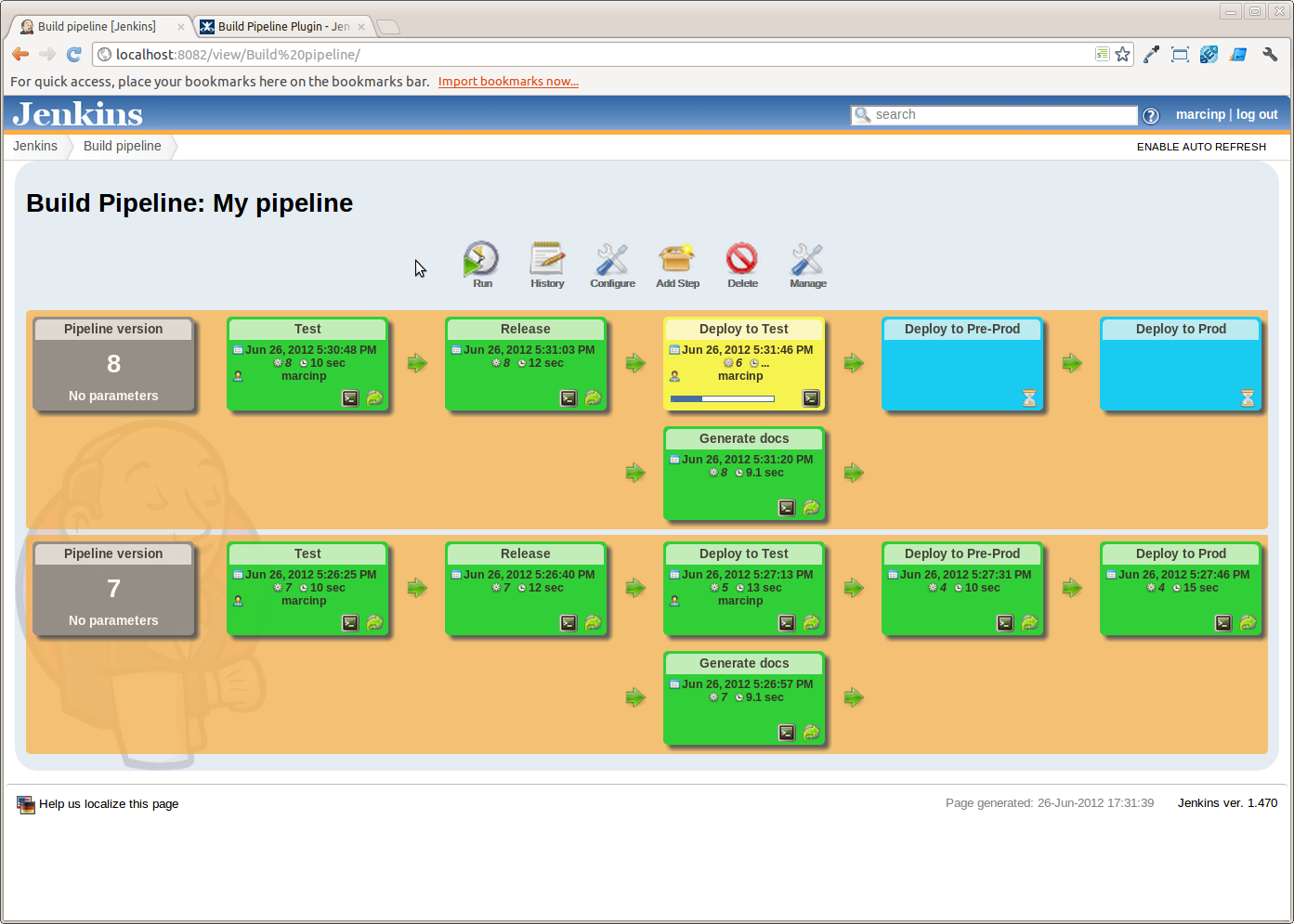 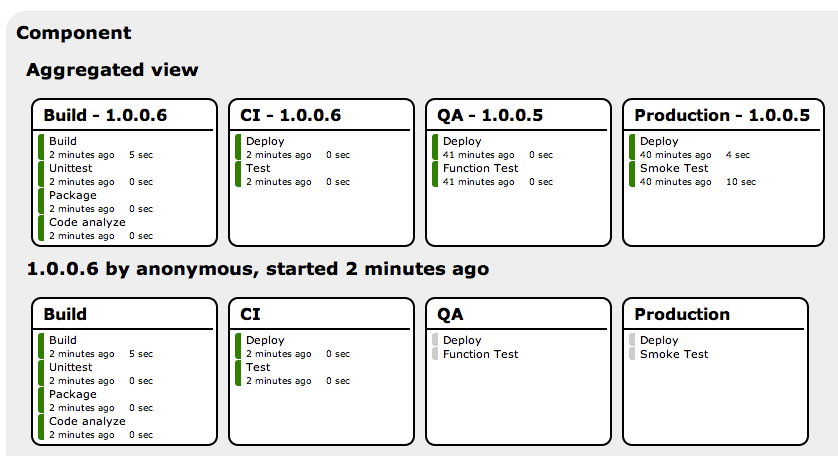 I installed an Ubuntu 13.10 server, used the standard available Jenkins package to install Jenkins. Since JDK 8 has recently been released, I decided to try out the installation on JDK 8. I also installed Glassfish Server 4.0 and Netbeans 8.0.

Netbeans 8
I created a simple Maven project in Netbeans and used JAX-WS (https://jax-ws.java.net/) to create a simple HelloWorld webservice. My simple project consisted of one parent project and two child projects; a WAR project (the actual webservice) and an EAR project (J2EE application) which also contained a call to the glassfish-maven-plugin. 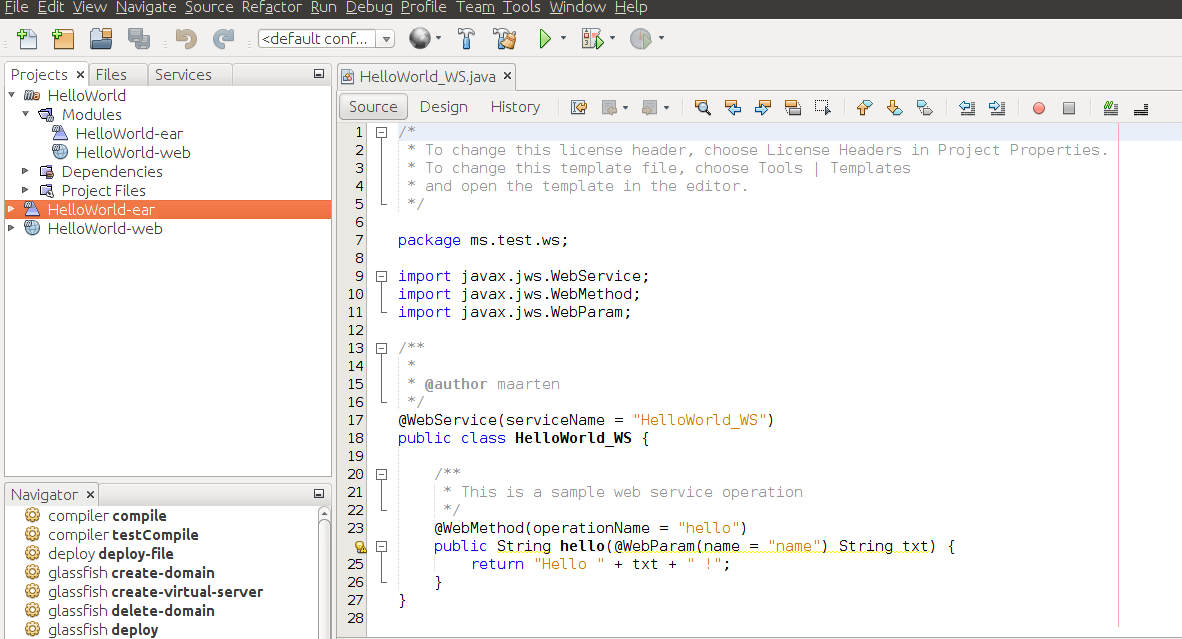 Glassfish 4
To make Netbeans deploy to my ('remote') Glassfish server (installed under a different user) I needed to enable secure admin: https://netbeans.org/bugzilla/show_bug.cgi?id=232739

Also it saves time to have Glassfish start automatically when the server starts. There is a nice command available to generate the required scripts: sudo $GLASSFISH_HOME/bin/asadmin create-service.

NetBeans 8 + Glassfish 4 and the test project
Next I needed to download/install a local Glassfish server so Netbeans could find the libraries (I did not want Netbeans to be poking around directly in the server folders with a different user). My server configuration looked as followed: 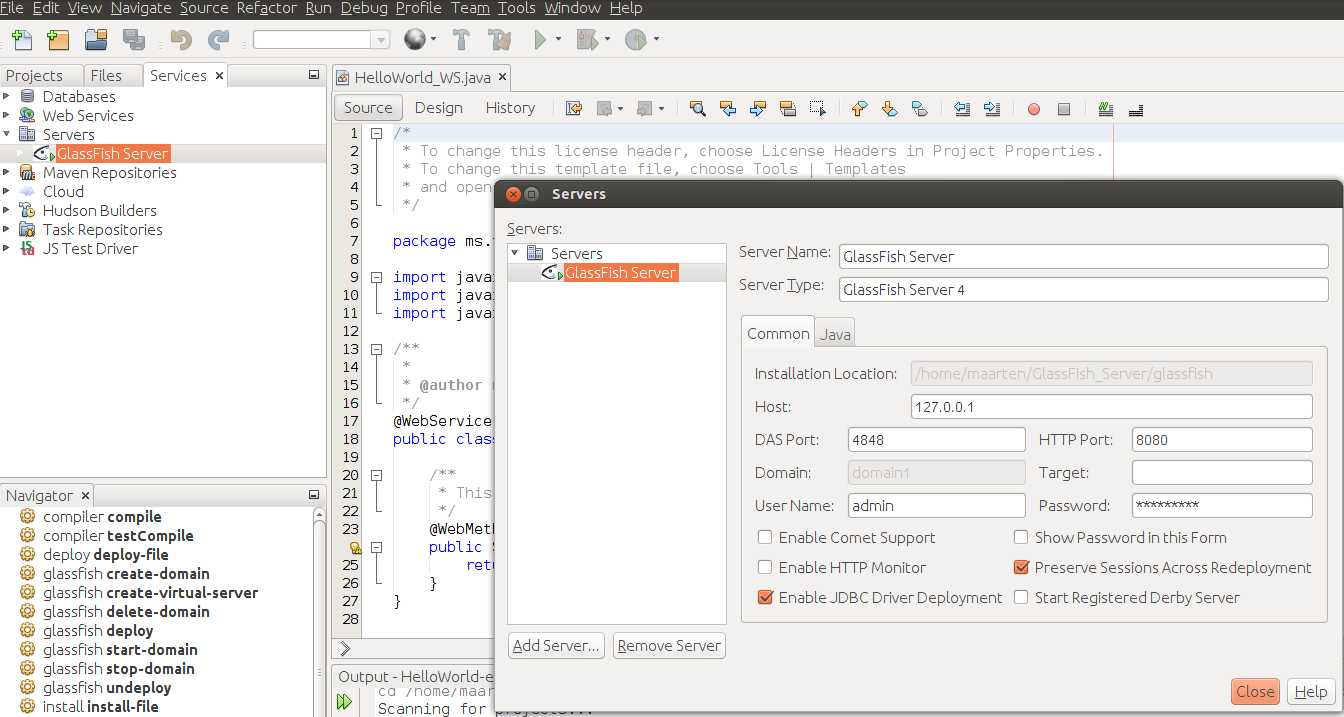 In order to deploy to Glassfish, I needed some configuration of the glassfish-maven-plugin (https://maven-glassfish-plugin.java.net/). In order to execute the plugin as part of a Maven build phase, the phase tag needs to be specified.

The pom.xml for the EAR project contained the following;


The properties like glassfish.domain.name were defined in the parent pom so they could be shared by different projects. The redeploy goal only works if the project is already deployed. The deploy option only works if the project is not deployed yet. It is not possible using the maven-glassfish-plugin to specify force (in order to make redeploy work even if the application has not been previously deployed) (https://java.net/projects/maven-glassfish-plugin/lists/users/archive/2010-08/message/6). The following specifies two possible solutions: http://stackoverflow.com/questions/14686973/maven-glassfish-plugin-how-to-specify-deploy-target; using the exec-maven-plugin and building your own maven-glassfish-plugin. There is of course also the option of using the Ant task (http://docs.oracle.com/cd/E19798-01/821-1752/beaep/) which does support the force option. I used a workaround: deployed the application for the first time manually (from Netbeans) and did redeploys after that from Jenkins.

A first experience with Git

Git is different then for example SVN (Subversion) in that every developer has it's own local repository in which he does most changes. He can push/merge his changes to an upstream repository and pull changes from that repository into his own.

First I went to my project root (/home/maarten/NetBeansProjects in my case) and did the following:


# On branch master
nothing to commit, working directory clean

I wanted a Git server installed for Jenkins to use. I did the following:


The NetBeansProjects directory which was created, seemed to contain the same content as the source so I thought that it was ok. I configured SSH keys (using https://help.github.com/articles/generating-ssh-keys and http://www.gilluminate.com/2013/04/04/ubuntu-ssh-agent-and-you/) so the Jenkins user could access the git directory as git user.

Jenkins and the plugins

Jenkins used the same port as Glassfish: 8080. I moved Jenkins to port 8888 by changing the port in /etc/default/jenkins. After starting Jenkins and accessing the URL, the below message appeared. 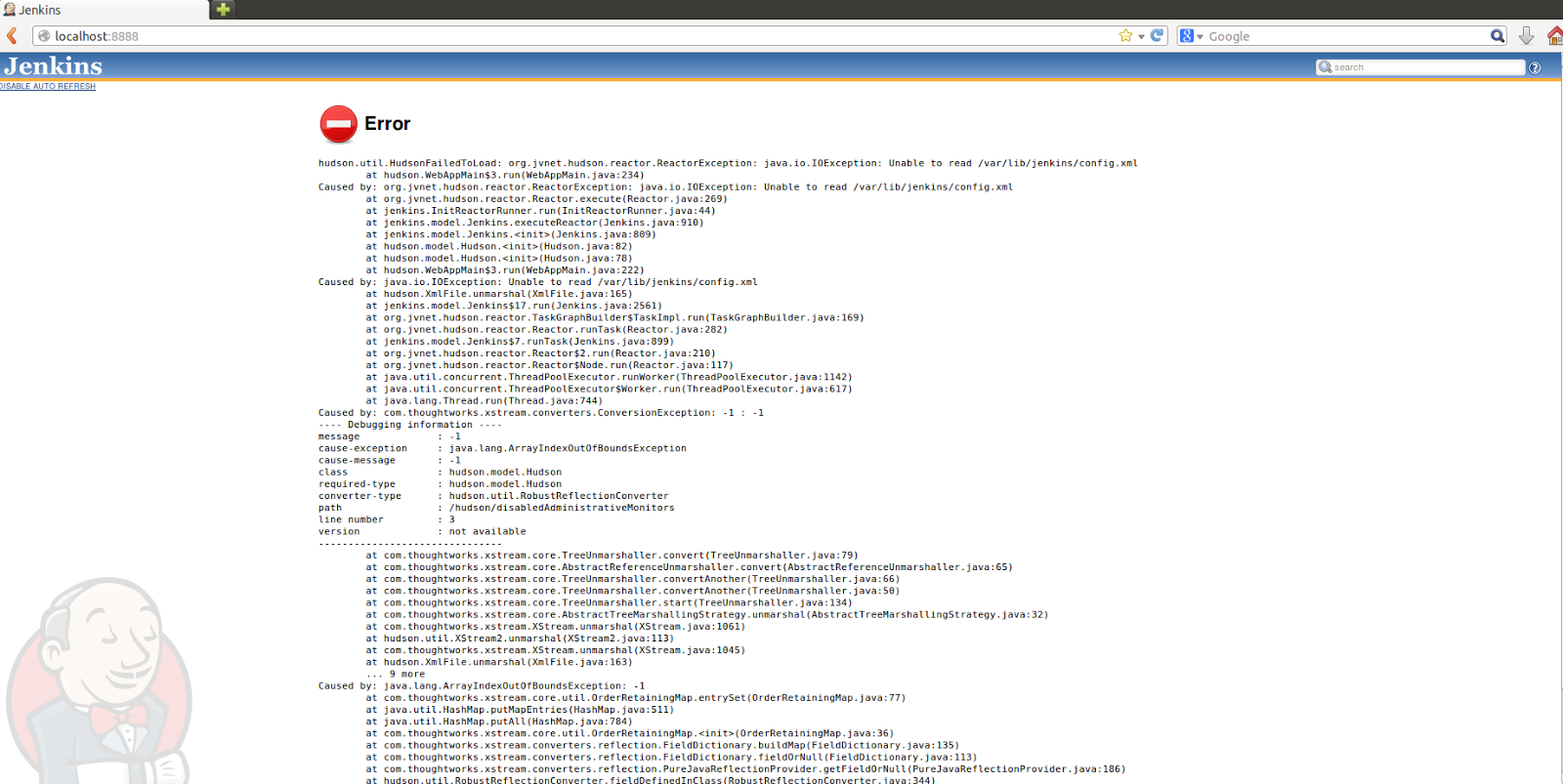 I changed the JDK 8 in the same /etc/default/jenkins file to a Java 7 OpenJDK version and it worked.

In Jenkins I created a credential in which I defined the private key the jenkins user should use in order to authenticate himself to the git user. For git user I had added the public key of the jenkins user to his authorized_keys file.

Also I set-up simple global security without locking myself out.

Next I installed the Jenkins Git plugin (GIT plugin). I configured a default job to use the common Git repository and do a build.

I installed the Build Pipeline plugin (https://wiki.jenkins-ci.org/display/JENKINS/Build+Pipeline+Plugin) and the Delivery Pipeline plugin (https://wiki.jenkins-ci.org/display/JENKINS/Delivery+Pipeline+Plugin). Both plugins depend on the same mechanism: upstream/downstream relationships between projects. What are these relationships?

In my example I created two jobs. One for building and one for deploying. The Build Pipeline plugin displays their relationship and allows execution of the pipelines.

The plugin allows to make certain steps triggered manually instead of automatically:

When looking at the screenshots/documentation of the Jenkins Delivery Pipeline plugin, this plugin is used on top of the Jenkins Build plugin. It allows jobs to be grouped in stages and assigned a task-name. These can be assigned in the job configuration.

This is presented when opening the view so progress per stage can be monitored in a business user friendly way. 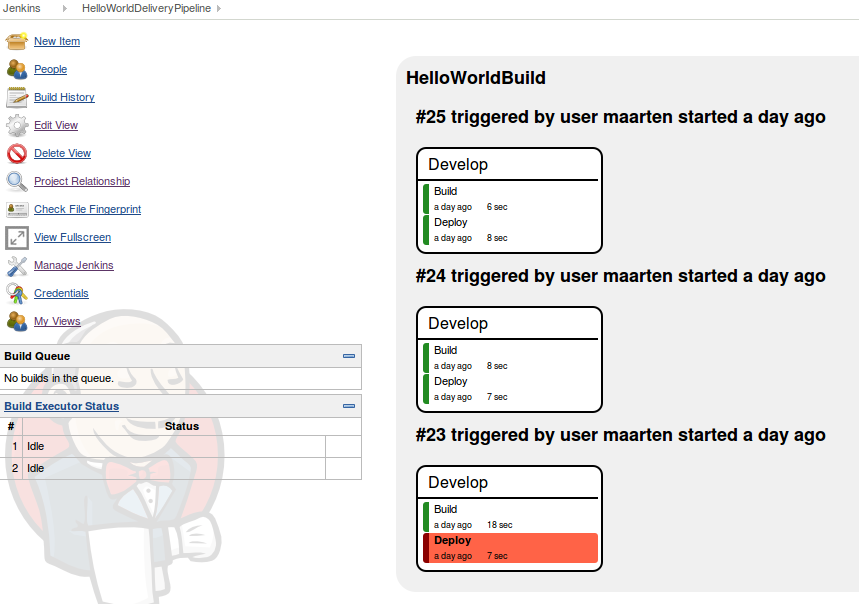 The above was a quick tryout of two plugins. I spend little time on creating an extensive example. I have not created an entirely automated release process or used multiple environments for testing the setup in practice. Also I might have missed certain functionality.

The plugins should be used in conjunction with each other since manual tasks in a Delivery Pipeline plugin are created by using the Build Pipeline plugin. I was surprised to find that the pipelines themselves are mere views dependent on configuration at job level. I had hoped to find a more process driven way of defining a the relations between jobs instead of depending on the upstream/downstream relations between projects. Because the flow is fixed in the Jenkins job definitions, the plugins cannot be used to actually control the flow more then triggering fixed next steps.

If you have setup your Jenkins jobs the way the plugins want it, the views allow you to monitor progress and provide a more business user friendly view on releases. To accomplish this, my first impression (might be premature!) is that you would need jobs per environment instead of a single job to run for every environment which has the environment specific properties (e.g. env/user/pass). If you have a Jenkins environment already in use and you want to implement the plugins, you might have to do some rework.

The Pipeline plugins are most suitable for completely automated processes. A manual trigger can be implemented to pause at a certain step but it appears every step to be executed needs to be a Jenkins job. This might not be what you always want, for example to model a user acceptance test. The plugins are relatively new though (March 2013 for the Build pipeline plugin and October 2013 for the Delivery Pipeline Plugin) and the functionality will most likely be expanded. Also the plugins don't have much users yet. It might be wise to wait for wider adoption or look for alternatives.
Posted by Maarten Smeets at 11:20 AM